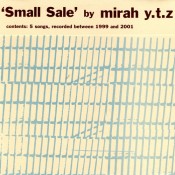 Notes: 1st press covers have full color photograph on jacket. Sleeve design by K. Mroczek and Amber Bell Printed on Combination Press using silkscreen and letterpress and file folders. A small number of covers for the first press did not include the photograph. Dreamboat and Lone Star were previously released on a now out of print cassette called Parts of Human Desire that Mirah released herself. All 3 pressings of this 7: are out of print. However, all the tracks were reissued on a compilation CD called The Old Days Feeling.