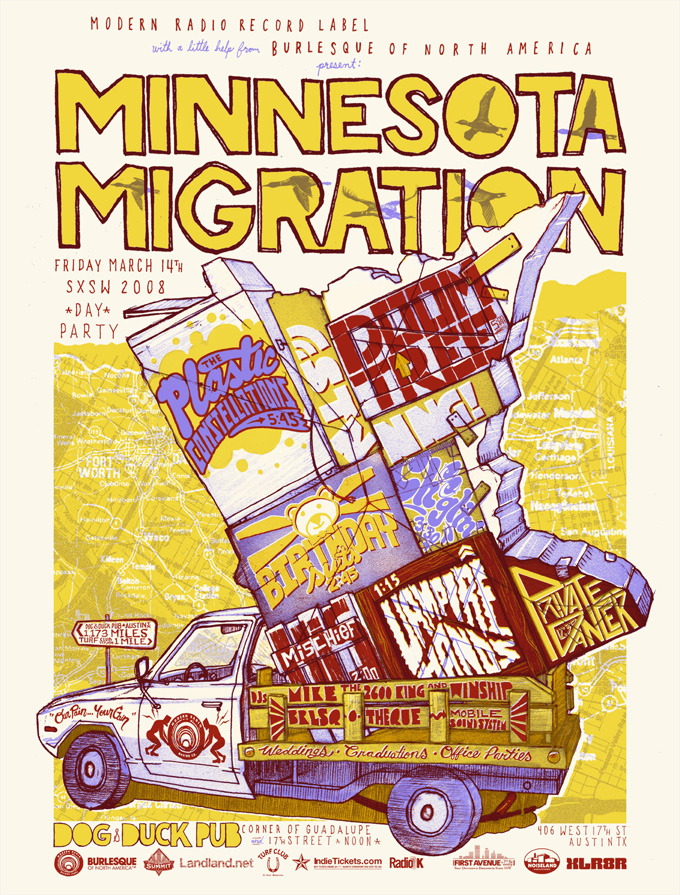 This week we take you back to 2008, Austin Texas, for the first ever Minnesota Migration day party at South By Southwest. This Poster was created by Wes from Burlesque of North America and the MN State/truck logo was designed by Dan from Landland. We were able to put together a pretty amazing lineup including all members of Doomtree, The Plastic Constellations, Vampire Hands, STNNNG, Birthday Suits, Chooglin’, His Mischief, Private Dancer and more.

Summit donated 16 cases of beer for the show, but because of interstate liquor distribution laws we had to sneak the beer down to Texas, each band hauling a few cases. I was amazed that it made it down there unconsumed. For the venue we were able to piggy back on the Dog and Duck Pub’s huge annual St. Paddy’s Day party, so there was this monstrous tent and stage setup in the parking lot. Admittedly, because of the venues location, further away from the center of the festival, attendance was a little sparse. Looking back I’m really glad we were able to coordinate so many great people from the Twin Cities down in Austin, but at the time I remember it being a ton of work and super stressful. Thanks again to everyone who was involved. – Pete