AMP 176 began playing shows in the January of 1998. The band was formed by the former members of Minneapolis punk and hardcore bands. Sloan had played guitar in Dillinger Four and Man Afraid, Eric had played guitar in Killsadie, and Roger had played drums in Saddest Girl Story. AMP 176 played shows around Minnesota over the next year and parted with their bass player and good friend Dan. Dan had a baby on the way and needed to focus on that part of his life. Jason Miller replaced Dan on bass. In the Spring of 1999, they recorded their first two eps with Mike Wisti at Albatross studios. The first release was a split with the now defunct New York band, Angels in the Architecture released on 1% records.The other release was a split 7″ with Cadillac Blindside for their tour in the Spring of 1999. They had a three week east coast tour which stopped quickly in Florida when their van broke down. Later that same summer, they recorded for the Modern Radio Presents Vol 1. 7″ that included Selby Tigers, Hidden Chord, and The Forty-five. The Fall of 1999 saw a few changes. Jason Miller left the band to front a new band called the Crush. He was replaced by Nora who had played in several local bands. Eric also joined the Stereo on guitar and toured with them until June 2000. Up to this point, Amp176 have been playing scattered local shows. They started playing regularily again and recorded a full length album at Albatross with Mike Wisit late July/August. The full length record was released by Modern Radio in late August 2000 and is co-released by another good local label, Pshaw. After a September east/south tour with friends Motoin City Soundtrack, Nora moved to Seattle and was replaced by Scott Cook, who played in Bombsite with Sloan as well as with the Minneapolis bands The Porcelein Boys and Jettison. AMP 176 played their last show August 2nd of 2003 at the Triple Rock Social Club. Eric continues in Attention, Scott Cook shortled played with Brian and Dave of Signal To Trust in a band called Coca-Colonial during Spring/Summer 2003 who has disbanded, and Sloan is starting a new band with Zach of Cadillac Blindside. 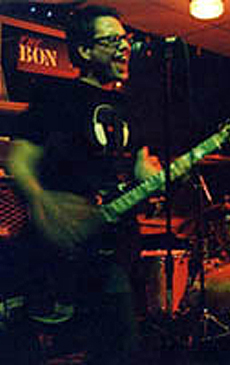