Betty Gone Bad began with friends Alison Neumann and Chris Schlicting wanting to play music together in Winter 99′.Chris had previously played in the Minneapolis band Bombsite. They were joined by friends Ed Varga(who also ran homocore Minneapolis at the time) on drums and Sara Carlson on bass. They played numerous basement shows and in Fall 99′ the band split ways with Ed Varga. They played scattered shows with Jonathon Warnburg on drums for a couple of shows. In Fall of 1999, they recorded a few songs and made a tape of the songs for a few shows. Sara moved to Chicago but they would play shows when she was in the Twin Cities usually with Jacob Steinbauer on drums. In the Fall of 2000, they recorded two songs with Mike Wisti for a split 7″ with The American Monsters. Dave Storberg played bass and Jacob Steinbauer played drums on the recording and at a show. Dave and Jacob were both temporary since they were both involved in other musical projects so they left the band shortly after recording. They were replaced by Jill Lipski on bass and Andy Fuller on drums. This lineup started playing shows together in Spring of 2001 which coincided with the release of their split 7″ with the American Monsters. Betty Gone Bad played their last show 10/13/01. Alison played bass for Twin Cities grindcore band Bodies Lay Broken for a number of years. Chris works in academia and is a dance performer. His band Bombsite played a show in April of 2014 for the 20 year anniversary of Extreme Noise.

Discography:
1. self released cassette tape-out of print-Spring 2000(only a handful made)
2. split 7″ with The American Monsters co-released with 529 in Spring of 2001. 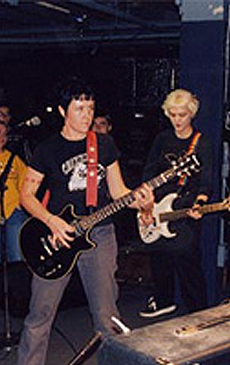