Formed in 2002 in Minneapolis, Minnesota, Cave Deaths didn’t begin playing live until 2004. All members of Cave Deaths are veterans of loud, aggressive guitar bands (Nate plays guitar in STNNNG, Andy plays guitar and sings in the Vets, Dan drums in These Riffs and Banner Pilot, and Holly has played on records by Hockey Night, Thunder in the Valley, Signal To Trust, and Huge Rat Attacks). The band formed as The Vets lost their first drummer and Nate and Danny saw the end of one of their bands called The United Snakes. All three wanted to take a different approach to music. This approach was fostered through the addition of Holly Habstritt to the band. Her Rhodes keyboard and trumpet add a unique atmospheric element to the music.

Cave Deaths generally opt for a more reserved and spacious approach to post-punk rock. Dark themes emerge of the desolation of the modern day workplace and life in America. Andy, Nate and Holly all take their turns sharing vocal duties and blending their voices to expand the landscape of the music. The title of the album is apt because within this cold structure lays a deep burning strength. Glacier on Fire was recorded by David Storberg (Signal To Trust) and the Cave Deaths.  Cave Deaths broke up in 2007 but played one show for the 9 year anniversary of Modern Radio on May 31, 2008.  Nate continues to play with STNNNG, The Chambermaids and American Cream. Andy and Holly formed Whitesand/Badlands.  Danny still plays in Banner Pilot. They signed to Fat Wreck Chords in 2009. 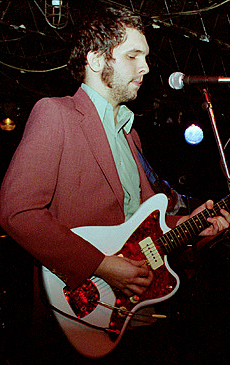