Freeze Baby was formed from the remaining members of Fuck It in April ’02. Fuck It’s drummer decided he wanted to focus his attention on his tattooing and so he parted ways with the band. They tried out a couple drummers, but in the end decided to have Jessica move from vocals to drums (she had briefly played drums in the past). In July of ’02 Freeze Baby recorded a demo after being together 2.5 months with Mark at I.N.C. The version of Panty Raid Revenge on the Minnesota compilation “All Attack! No Hold Back!” was from that recording session. Freeze Baby recorded with Brooce Tempelton in January 2003 and released their first s/t 7″ in early May ’03 which was co-released by Modern Radio and Mary from Freeze Baby’s label, Spinster. Freeze Baby broke up in the winter of 2004. Mary went on to play in a band called Double Cross, Steph played in a band called The Deaf, and Jessica is playing in a new band as well.  Steph currently has a project with Martha from the Chambermaids called Finger Pressure, and also has started playing with former members of Baby Guts under the name Cadette. 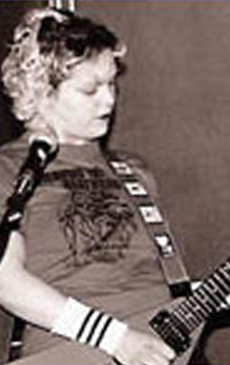