Grotto began in the Winter of 1995 during their first year of high school. They played their first show in the Winter of 1996. After playing scattered local shows, things paused in the Spring of 1999 as Mike traveled. Chris played and sang with the short lived Pushbutton 3. Jeff played drums for the Hidden Chord along with recording with them on their first two 7″s. Jeff also played with Sean Na Na for a few shows and ended up playing on the song “Princess and the Pony” that was on the Sean Na Na split with Mary Lou Lord on Kill Rock Stars. When Mike returned, Grotto regrouped and recorded their full length, Get A Hustle, with Mike Wisti. Around that same time Jeff left the Hidden Chord. Get A Hustle was released in January 2000. Since then, they have toured the east and south in the summer of 2000. In December of 2000 they recorded for an CDEP that was released by Double Indemnity records out of St. Paul in the Summer of 2001. After sporadically playing over 2002, they broke up in the Spring of 2002. The band played a reunion show in 2008 for the 9 year anniversary celebration of Modern Radio. Jeff  played with a variety of Twin Cities artists including Sean Na Na, Monarques, Har Mar Superstar, Askeleton, His Mischief and Bombay Sweets. Mike played in a number of bands in the Twin Cities over the years.  Chris went to grad school and spent some time living in the Middle East and Jordan. 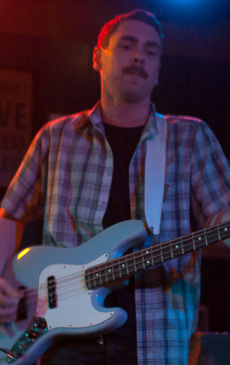