International Novelty Gamelan is a group of musicians exploring new music using instruments of the Javanese gamelan orchestra. Thier goals are to provide an opportunity for composers and musicians to explore new ideas and combinations of sounds and to broaden the range of what gamelan is thought to be.

When International Novelty Gamelan was founded in 2001, most members studied traditional gamelan music from central Java. While there is a strong tradition of playing new music in central Javanese gamelan, they wanted to expand beyond the bounds of traditional form. With the instruments tuned to each other in set scales, gamelan instruments are ideal for compositional exploration and improvisation. All members of the International Novelty Gamelan compose pieces for the group, bringing their unique voice and style. Compositional influences range from traditional Javanese and Middle Eastern music to baroque music, western pop, noise and experimental jazz. Where appropriate, they blend non-gamelan instruments into the mix, including doumbek, trumpet, alpenhorn, violin, and bass clarinet.

Kristen Murray has played with International Novelty Gamelan since 2004, after studying traditional Javanese gamelan for several years. She is also a designer and educator, with a focus on urban neighborhoods and the ways that art, design and community organizing can help make them more vibrant and more accessible to the diverse people who are invested in there, especially people who have been historically marginalized.

Munir Kahar is an artist from Java, Indonesia. Visual art is his primary artistic expression. He also creates music and theater performances.

Tom Patterson is a music maker in Minneapolis and huge music fan of all genres. Most of what he has written over the last 5 years is for Javanese gamelan, but stylistically owes very little to Indonesian music. It’s just indie rock or whatever other weirdo noises banged away on these great bronze instruments. He also writes some Western classical stuff. Check him out on Soundcloud.

Percussionist Kevin Cosgrove has involved him self in various musical situations from free improv to theatrical orchestras. Beyond ING he has a percussive dark ambient solo project called ‘Transitional Species’ and drums in the band ’Trike’ He is the founder of the noise collective ‘Tourniquet’ and is an original member of the infamous ‘Poop Smear Mirror’. Here’s his bandcamp page.

Multi-instrumentalist Elaine Evans explores freeform improvisation with varied wind, string, and percussion instruments. Elaine’s current direction is improvisations with pocket trumpet, violin and loop pedal, layering harmonies, dissonances, and rhythms. Elaine toured Europe with her trumpet and loop pedal in 2008 and the east coast of North America in 2009. Elaine is a founding member of the International Novelty Gamelan, a group using the undeniable soul and approach of ancient Javanese musical tradition to create new, modern works of startling beauty and originality. Elaine composes for the group in addition to performing. Elaine is also a scientist specializing in bee biology. 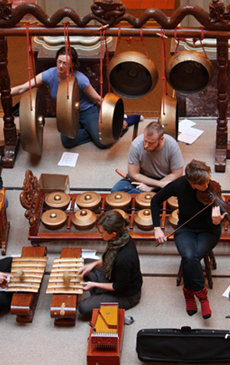