Malachi Constant hails from Saint Paul, Minnesota. Early comparisons to their music have been made to Sonic Youth, Trans Am, Bundy K. Brown, and other such luminaries. However, with “Pride”, the band’s 3rd and final album, MC seems to have dropped out of guitar school and moved onto a more prescient challenge, experimenting with a more ambitious formulization. Their playful approach to performance is ever present, and “Pride” blends the band’s tearing-riff-antics with a fresh vocal expression. Its not electronic music, its not indie rock, and its not post-punk yet it combines elements of all three for a blend uniquely Malachi Constant.

“Pride” heeded the band’s 8th year together as music-mates. Sadly, this achievement also marked the end of an era for drummer Alex McCown. As Alex began his pursuit of life’s most critical theories, Superhopper drummer, Nick Shuminsky soon after followed Alex’s beaten path.

Since the release of their previous album “Infinite Justice,” Malachi Constant has performed with a variety of notable musicians including Brother Ali, Thunderbirds are Now!, Enon, The Plastic Constellations, Hockey Night, Outhud, Menomena and P.O.S.

In 2007 Malachi Constant stopped playing shows. No official break up was issued. Carl sold out to become a lawyer, Ben is in politics, Nick is playing with Free Energy, Sean sits at home and looks in the mirror. 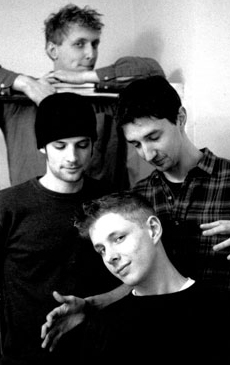