Mirah Yom Tov Zeitlyn has been at the heart of the vibrant Northwest independent music scene ever since her debut album ‘You Think It’s Like This But Really It’s Like This’. A collection of her own 4-track recordings alongside collaborations with Phil Elverum of The Microphones/Mt. Eerie, the album became an instant classic. A follow-up to her first release, the stunning ‘Advisory Committee’ (2001) cemented Mirah’s place in the alternative music canon. These albums were an exploration of the territories beyond lo-fi, aiming to transcend mere technical limitations and to push the boundaries of ‘indie-rock’ towards a more meaningful communicative goal. Phil Elverum’s sound experiments collided with Mirah’s striking lyrical poise and unabashed emotional honesty and the resulting mix proved quite evocative. 2003 saw the release of ‘Songs from the Black Mountain Music Project,’ the result of a self-imposed artists-in-seclusion collaboration with Brooklyn-based artist and musician Ginger Brooks Takahashi. Mirah began working with Lori Goldston and Kyle Hanson of Seattle’s Black Cat Orchestra in 2003 and the release of a collection of cover songs followed. The album ‘To All We Stretch the Open Arm’ was conceived as an anti-war statement and included renditions of Leonard Cohen’s ‘Story of Isaac’ and Kurt Weill’s ‘What Keeps Mankind Alive.’ Mirah’s third solo album ‘C’mon Miracle’ (2004) combined the ever-present youthful splendor of her earlier works with a more mature stylistic component which led many critics to hail it as her best work to date. A sonic expedition, Joyride: Remixes was released in 2006 and features dance remixes of tracks from Mirah’s three solo efforts by the likes of The Blow, Guy Sigsworth, Mt. Eerie and Anna Oxygen. Next, in 2007, came another turn with Lori Goldston and Kyle Hanson who had since re-created themselves as Spectratone International. Share This Place: Stories and Observations was the culmination of this second collaboration. The insect-inspired extravaganza became a multi-media performance featuring stop motion animation by Britta Johnson and 12 songs based in part on the writings of the influential French scientist/poet Jean Henri Fabre. A dip into the past brought forth 2008’s release of The Old Days Feeling, a collection of singles and previously unreleased rarities. 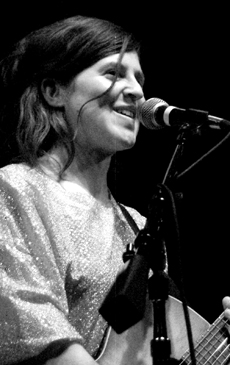