STNNNG (pronounced “stunning”) are from the Twin Cities of Minneapolis/St. Paul, Minnesota. No, they do not sound like any of those three Minneapolis bands you can think of from VH1 Classic oversaturation or Rolling Stone’s retro-active fawning. They sound more like a lumbering giant laughing madly while tangled up in some barbed electric fence. In other words, like heavy rock in the art-y/noisy Touch & Go vein. Think punk rock tenacity with metal power, classic rock riffage, vaudevillian showmanship and the hyper-literate lyrics of a man seemingly possessed by a full encyclopedia set of subtly deranged characters.

Since forming in 2003, STNNNG has released five full-length albums on Modern Radio Record Label, performed at over 300 shows, and basically perfected the art of turning their audiences into shit-grinning masochists. STNNNG is one of those rare bands that seems too damn good to give a fuck, but actually do reach out to grab you, make you smile, wince, heckle, and thoroughly engage as they pummel you into a lifeless purple pulp. On stage, the band’s a drunken speedboat careening off every ship in the harbor. Their five spastic bodies leap, puff, snort and wrench like the subjects of some mannerist sculptor’s wettest dream. I mean it when I say there is no better live band on this earth to photograph. 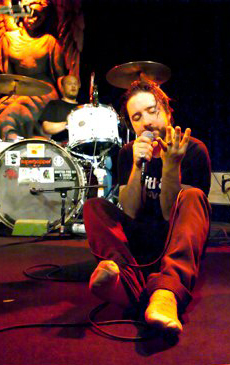