The Hidden Chord formed after Knol’s departure from Killsadie in December 1998. Knol was joined by Brian Severns of The Misfires, Jeff Brown of Grotto, and Dan Buettner who had recently moved to Minneapolis from Kalamazoo. Dan had previous played in Ordination of Aaron and Broken Hearts Blue. In the Spring of 1999, they recorded four songs with Mike Wisti which became their 7″s on Modern Radio and Heart of the Champion. Both 7″s were released in July of 1999 just in time for a short weekend of shows in the midwest. Shortly after the release of the 7″s, Jeff left Hidden Chord to focus on Grotto. He was replaced by Matt Hart who had recently moved from Wisconsin. He previously played in a band called Prisoners Of. During January and February of 2000, they recorded with Dave Gardner at a remote location in southern Minneapolis. The songs from those sessions became Eight Blue Eyes and was co-released by Blood of the Young and Heart of the Champion in September 2000. Prior to the release, they spent the Summer of 2000 on a east coast tour. Shortly after the release of Eight Blue Eyes, the band recorded the songs for Abegail Vongetti. They toured out east in June of 2001 and after they returned, Abegail Vongetti was released on CD by Blood of the Young and vinyl by Level Plane. In the Fall, the Hidden Chord returned to the studio with Eric Olsen(who also helped record Eight Blue Eyes) to record the songs for the Captain and His Entourage. Those songs were released on CD in March 2002 by Level Plane records. The Hidden Chord played their last show on 6/11/02 at the Babylon in Minneapolis. Knol’s started a band titled Askeleton and Brian continued on to play with Signal To Trust. He joined Signal To Trust in July of 2001. 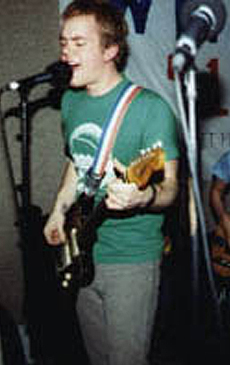