The band started as four friends in high school with a shared love of music. In 1998 they released a 7″ on their label, Pretentious Records. In a little over a year, they sold through all of their copies. Early 1999, they went to the Terrarium with Dave Gardner and Eric Olson and recorded 7 songs which became the We Got the Movement CDEP. It was released in the Spring of 1999 on Pretentious Records. Over the next year, they played around the Twin Cities, the Midwest, and took a trip up to Winnipeg, Canada. In the Spring of 2000, they went back to record with Eric Olsen and Dave Gardner, but this time they recorded at Burrholland. The songs became their first full length, Let’s War. It was released as a joint effort by Modern Radio and Blood of the Young. Soon after the release of the CD, the band toured out east playing with friends The Vida Blue and the Hidden Chord. In the Spring of 2004 the band released a CD titled Mazatlan on 2024 Records. TPC then signed with New York label, French Kiss in 2005, and in 2006 released thier third full-length, Crusades. The LP version of Crusades was released months later on Modern Radio. 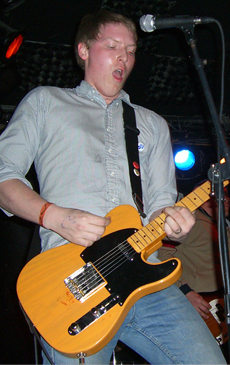