Adam Burt and Andy Larson had previously played in a band together called The Early Americans who were originally based out of Moose Lake which is in close proximity to Duluth, MN. Jonathon Warnburg of Signal To Trust and the Misfires was a drummer for them when they broke up. The Early Americans recorded a full length called Aha!, Airmen Secretly (which was recorded by Al Sparhawk of Low) and a final ep recorded by Brooce Templeton of Dwindle that may never be released. In addition, Adam and Andy played in an earlier version of the Black Eyed Snakes with Al Sparhawk.  The Early Americans played their last show in July of 2000.

Adam and Andy continued playing together having both moved to the Twin Cities area. Two months later they found a new drummer in Adam Patterson. They started playing shows in the Fall of 2000. In July of 2001, they spent two weekends in Chicago recording and mixing their first full length with Greg Norman at his home studio. It was released in April 2002. Shortly afterwards, Adam Patterson left the band to move to France and was replaced by Ryan Parsons.

In January of 2004, The Vets recorded thier followup to 2002 debut entitled Ad Infinitum. It was recorded by Brooce Templeton at Analog Electric Studios, and was officially released in Fall 2004. In January 2005, the Vets did a week tour through the midwest with Missouri’s Warhammer 48K. Ironically, In the winter of 2005 Ryan Parsons path also led him to France, while Patterson returned for his second stint with The band. Preliminary work has been done on a third full length recording. However, The Vets never finished as Patterson moved to Milwaukee for graduate school.  The unofficial, last performance of the Vets was at Big V’s in St. Paul on August 5, 2006. 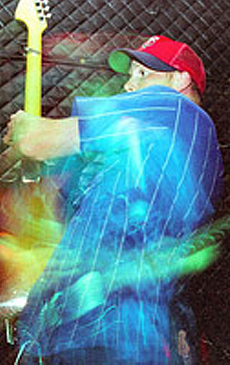