Vampire Hands is from the Twin Cities and began playing in 2006. The band has been writing songs at a furious pace and are constantly outdoing themselves with each release. It was only Fall 2007 that Vampire Hands released their first full album, Virgin Dust American Lips. This followed two excellent self-released EPs that were later released together on vinyl. Me & You Cherry Red followed in 2008 on 12″ vinyl with modern Radio and the band self-released the CD version. The Me & You Cherry Red CD was then reissued by Modern Radio the following year with the added EP Cuz It’s a Beach Funeral. In 2009 Hannah in the Mansion was released in a limited vinyl pressing of 300 on Secretly Canadian imprint St. Ives.  Colin Johnson left the band late in the Summer of 2009. The band continued on as a three piece and  recorded a split 12″ with Daughters of the Sun, released in the Spring of 2010 followed by a US tour. They unofficially disbanded soon after, occasionally reuniting for a random show from time to time.

A mix of influences can be heard from psychadelic, experimental, noise, garage, dub, glam and pop. Comparisons can be drawn to Liars, T.Rex, Brian Eno, Can, Les Savy Fav, Iggy Pop, Royal Trux, John Lennon an Velvet Underground, but thier music comes off as much more than a collection of its influences. 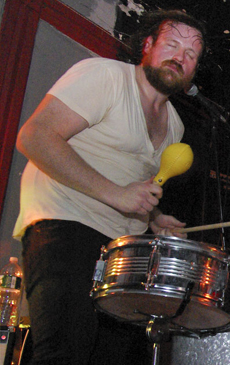