Jon and Jeff are brothers. They met Josh in high school. Gabe is from Madison, WI. Jeff met him there in 1996 when he was in college. Gabe moved to Minneapolis. Jeff dropped out of Madison and moved back to Minneapolis. Jon and Josh were still in high school at this point. Josh had just begun to teach himself how to play drums. Jon and Josh had some pretty neat stuff going on so Jeff decided to play along. Luckily Jeff knew a guy named Gabe, who could sing real perdy-like and was willing to play bass. Et voila! A band was formed. There were two Volante shows in 1998 before Gabe went to Nepal for eight months. The Inland EP was recorded in August of 1998 at Smart Studios in Madison, WI days before he left. In 1999, Gabe returned and Volante played many strange and wonderful shows. In August of 2000, Volante traveled East to Washington, DC to record the 45 Degrees North LP with J Robbins at Inner Ear. The album came out in February 2001. Volante did numerous tours throughout the Midwest and East coast during 2001 and early 2002. In December of 2002, Volante released a CDEP of remixes from 45 Degrees North done by Brooce Templeton. Volante is beginning work on recording a new album in March of 2003 with Brooce Templeton at several local studios including Pachyderm. The recording became Static Until Sunrise which was released in March of 2004. Volante followed up the album with extensive touring into the Fall of 2004. The band called it a day after the Fall 2004 tour. They left behind one final recording with Brooce Templeton that was slated to be a CDEP called Diode. 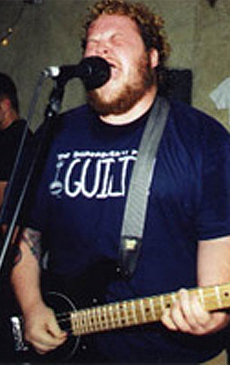