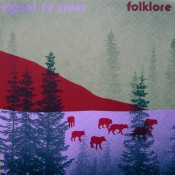 Notes: A short run of CD with alternate artwork and handscreened covers were available during their east/midwest tour in the Spring of 2002. The CD face has different artwork than the final released version as well. The songs and track listing are the same though. The short run was limited to 100 CDs.

The vinyl for Folklore is limited to 300 copies on sexy black vinyl. Brian spent many a sleepless night screening the covers for the record and the result is well worth all the effort he put into them. Vinyl is now out of print.

Track Listing:
The Spectacular
Falls At Montreal River
100,000 Miles
On the First Take
God of the Northern Woods
Which way to the Sunset
A Night at the Symphony
Warning of the Ships