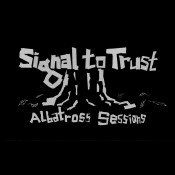 Before Signal To Trust released Folklore & Golden Armour, the band had a previous iteration of the band with Brandon Onward (Rouse) as the lead singer. You may have seen Brandon’s other band with Pete in the oughts called Falcon Crest at one point or another but this was a very different band. The original lineup of the band played their first show in the basement of Tom from Modern Radio’s house with The Facet (pre-Gravity Index from Denver) and Volante April 1, 2000. They released a 5 song handmade CDEP in 2000 for a fall tour out east and then went in the studio with Mike Wisti where they recorded 11 songs intended for a Spring 2000 release.

20 years later, Modern Radio is co-releasing this first full-length album for the band with Snappy Little Numbers (out of Denver run by Chuck from the Facet) and This Ain’t Heaven Recording Concern (out of Wichita run by Dan Davis who has been in a ton of awesome bands). We’ve enjoyed these tunes for a long time and feel like they still sound fresh.

Track List
D, D, Don’t Go Back
My Walkman Goes Loud
Planes Trains and Fucking Ships
I Don’t Want To Be A Waist
A Letter To The Editors
Pacing, Pacing, Pacing
Fast Track
The Overlord Within
The Ultimate Nullifier
Yellow Soldiers
Brushing My Teeth is Boring